Most water bodies in India have been taken over by a plant species popularly called Water Hyacinth (Eichornia  crassipes).  When  not  controlled,  water  hyacinth  covers  lakes  and ponds  entirely, with its  environmental  invasiveness. This  chokes  waterways, dramatically impacts  water  flow,  blocks  sunlight  from reaching  other  aquatic  plants,  and  starves  the water of oxygen, often killing the fish, frogs, turtles and other aquatic animals. The plants also create a prime habitat for mosquitoes. This species has rapidly spread throughout inland and coastal freshwater bays, lakes, and marshes and are a major hindrance to navigation as well.

Traditionally,   Water    hyacinth    has    been removed physically, manually or by using specialized machinery. But since the plants reproduce both sexually and vegetative,

left-over seeds  as well as portions  of stems  or roots  result  in the rapid proliferation of new  plants  and  the  infestation  becomes  as  bad  as  it  was  before  removal  within  three months! 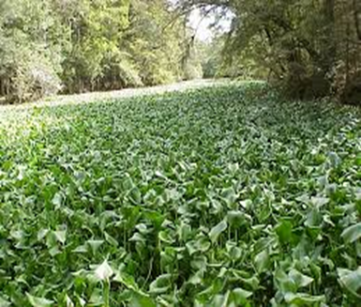 The water hyacinth choking rivers, waterways and water bodies can be easily eradicated in a four phase activity.

This consists of spraying ECPL-99, a proprietary organic reagent this will immediately stop the proliferation of Eichornia within three hours.  The water hyacinth in the sprayed area withers and dies.

This  destruction  is  not  caused  by  any  toxicity  in  the  reagent.  On  the  contrary,  totally organic  components  go  into  the  preparation  of  ECPL-99,  which  totally  absorbs  the Chlorophyll in the leaves and stems. Without chlorophyll, the plant is unable to prepare food and so whither and dies.

Three   to   four   days   after   the spraying operation is completed, the dead Eichornia plants can be dragged out of the water using a hook-drag   system   or   suitable dredging   equipment.   The   dead Eichornia can be converted into excellent natural fertilizers.

Once the bulk of the water plant is cleared, further proliferation and growth can be thwarted by a second spraying of ECPL-99. With this the plants’ seed and spores are   permanently   destroyed   preventing   future   regeneration.   ECPL-99   therefore provides a permanent solution to the Eichornia.

Lightly  spray  ECPL-99  once  in  three  months  for  2  years  to  ensure complete destruction of Eichornia and to eschew re-infestatiioon due to influx of shoots or spores from upstream.

is  a  neem  oil-based  organic  formulation  that  acts  as  a  weedicide  and herbicide.  The active ingredient is Azadirachtin.  It is food grade, non-toxic and safe for humans, animals and regular plants while being tough on weeds and harmful herbs. It kills the  plants  not  through  toxicity  but  by  absorbing  chlorophyll  in  the  leaves  and  stems. Without chlorophyll, the plants cannot manufacture their own food and as a result, they tend to wither and die.  This makes ECPL-99

Extremely safe for human beings and aquatic creatures like fishes, frogs, tadpoles, etc.  The safety of  this  reagent  places  it  in  a class above  conventional  inorganic  weedicides,  which  are  normally  corrosive  and  extremely harmful to humans and animal life.